A first map of mappers and network builders

Drew Mackie and David Wilcox May 2018

We are building a map of people and organisations interested in using different types of maps to identify local assets, connect communities, and build networks, particularly in London. Our aim is to develop and support a network, and communities of practice, that will contribute to making a London a more networked city. More here.

Before and during a Networked City event at Newspeak House on March 27 2018 Drew Mackie and David Wilcox invited those attending, and others interested, to contribute their profiles and connections to a map, using the front-end Sumapp survey tool, and Kumu mapping software.

The results shown here come from the 141 questionnaires issued the week before the Newspeak House event, a further set of 10 invitations sent out at another event to people who expressed interest and two further requests since then.

The sumApp software allows us to track how many people have opened the questionnaire (52%) and how many connections they have made.

The map below shows:

Some respondents suggested that further contacts NOT on the questionnaire’s ‘card set’ should be invited. As the survey progresses we will invite these and add them to the map. 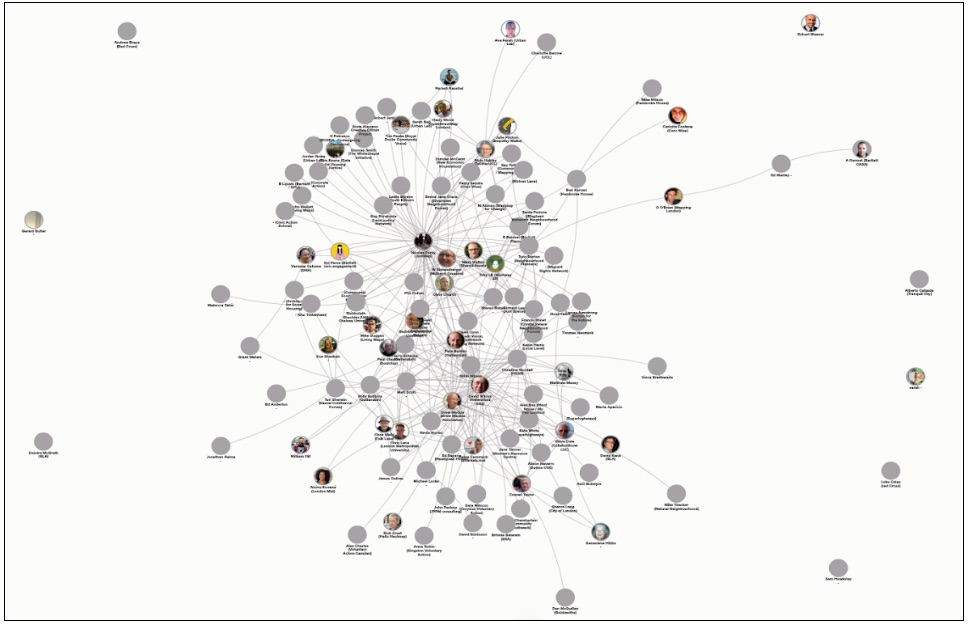 Note that the configuration of the map will change as new nodes and connections are added.

Of course the map shown doesn't mean much in paper form. The online version can be accessed here, by those on the map who have a password, and can be interrogated to show:

The map opening screen above shows a sidebar with a brief description and a list of nodes which has been generated by the software. Clicking on a title will take you to that node on the map and highlight it. The map itself shows the nodes of respondents and the connections they have cited in the questionnaire. Some nodes have images that have been added in the questionnaire or are attached by ‘gravatar’ to the node’s email address. The circle of outlying nodes is largely composed of respondents who have not specified any connections and have not been cited by other nodes.

The screen above shows an individual highlighted node with its scrolling descriptive sidebar.

The first reaction to a complex network map is ‘Wow’, followed by ‘How do I find my way around?’ - and eventually ‘How can I use it?’ (see later). There are various ways in which you can move around the map and search for the information that you want, if you have access to the map:

The screen above left shows an individual node and its immediate connections. The screen above right shows the same node and the nodes within 2 connection ‘steps’. This is really useful in exploring the new collaborations that you might initiate between:

A map can be decorated in ways that make it easier to understand. You can colour ‘communities’ of nodes that hang together because of the way they are connected. You can size nodes according to how central they are (see later description of types of centrality. You can create ‘pseudonodes’ - nodes that temporarily represent an attribute and then connect to all nodes that share that attribute. These are all ways of viewing the map and the software can save each as a ‘view’ accessed through a menu at the top of the map screen.

So how will you be able to use the Netmap?

The purpose of the map is not just to create a visualisation of collaborative connections. Within a few weeks the live map will be displayed as the last page of the survey. Respondents can access their survey page at any time to update information and to see how the map is progressing and to search and analyse. We give some examples of how the map might be used below:

Respondents were asked to indicate their interests from a tick box list and to add other interests not on that list. As the map develops we will expand the tick box list to include these added items. We can create ‘pseudonodes’ on the map which represent these interests and link the people / organisations to them. It is also possible to mark the nodes with colours that indicate their interests. A legend at the bottom left of the partial map below shows the colour code.

The survey also asked people to identify their needs and offers. We can search and isolate nodes that need certain assets and colour them. We can search and isolate those that offer assets that meet those needs and identify where there are existing collaborations and where we could encourage new collaborations. As in the map below we can color code a version of the map to show wants and offers. Each node with a halo of coloured indicators shows its mix of interests as described in the legend at the bottom left.

A key concept in network mapping is centrality. This covers various measures of how central nodes are to the working of the network. Centrality is not an inherent attribute of the node itself. Its a value conferred by the position of the node in the network. There are various types of centrality (see definitions in Appendix). The mapping software calculates the centrality of every node in the network. Generally, nodes that have a higher centrality score have greater potential to spread information and influence most effectively. Nodes can be sized to show how central they are.

It is possible to show the map nodes on a geomap created in OpenStreetmap. Kumu will automatically locate nodes based on postcode. The map below is created in Kumu through the recording of postcodes in the questionnaire. We have not shown the connections in this example as this can often be visually confusing. Clicking on any node will bring up the sidebar with its information. 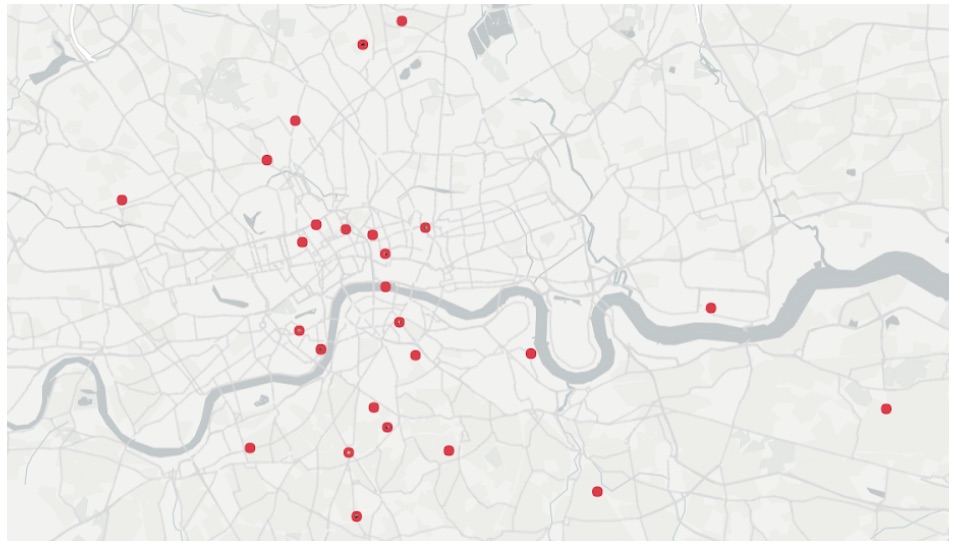