The following pages show snapshots of network mapping we have carried out over the last 8 years.

2 Mapping Delivery in Consultation and Engagement

6 The Children's EcoCity in Dunfermline

Drew Mackie worked as part of a Kevin Murray Associates team to look at the way that a regeneration partnership was working in the historic town of Berwick-upon-Tweed. The results were used to suggest ways of strengthening the partnership and ensuring the most effective use of the assets it could control and / or influence.

The network map below shows the links between organisations and groups as cited in questionnaire. The highlighted nodes are those with greatest potential to influence the network because of their position. 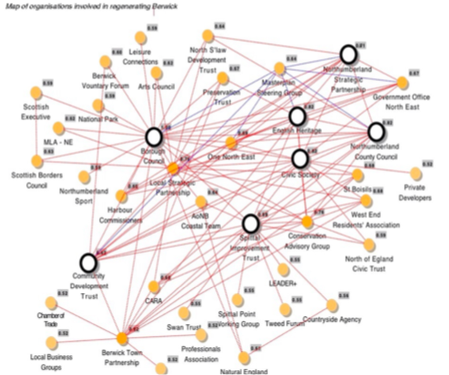 2 Mapping Delivery in Consultation and Engagement

This analysis was prepared for Belfast City Council some years ago to assess the network of departments and others involved in consultation and engagement. The analysis compared position in the network with perceived performance (assessed by themselves and by the other departments or grouped with which they worked) in terms of 5 types of Skills and Resources:

The network map shown below shows the relationships and sizes nodes according to betweenness centrality. 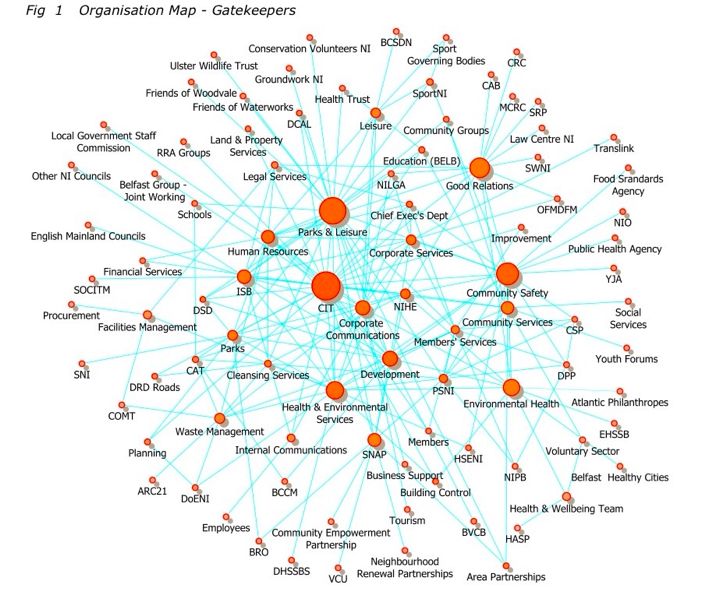 This map was prepared as part of a study of community tourism in Belfast conducted by TTC International. A series of workshops throughout the city collected comments from local people, politicians and professionals on what organisations might be able to deliver a community tourism strategy. 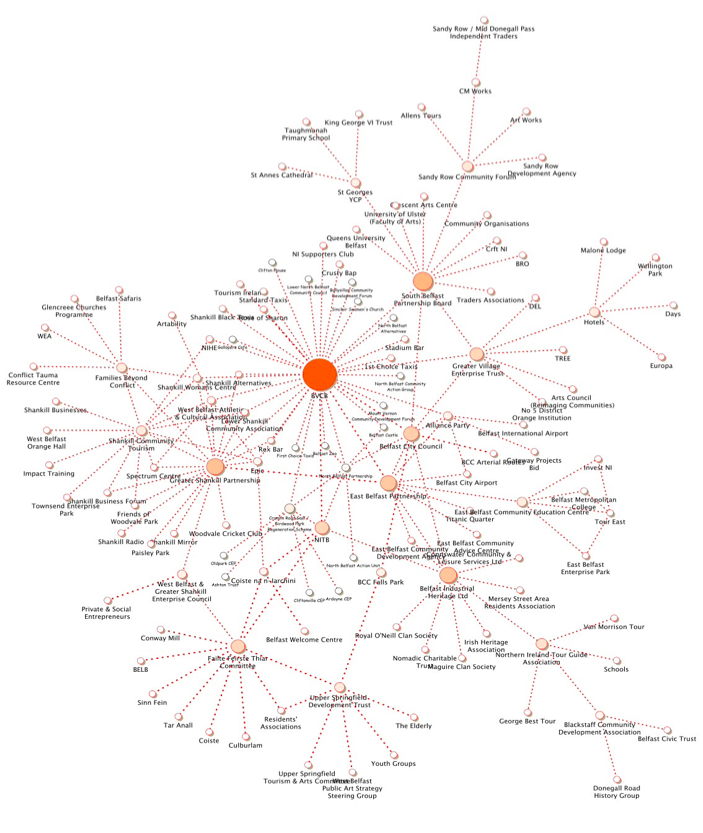 A conference was held by the Big Society Network in 2010. This consisted of a very ad hoc group of people gathered at the last minute by Twitter to catch the momentum of the incoming Coalition Government's Big Society agenda.

Around two thirds of participants (some refused to participate on principle and others just didn't return the survey sheets) completed a one question questionnaire asking - “Who do you work with most?”

The results were used to create the map below which showed that the organisations that might be expected to benefit from the government's Big Society policies were:

A more complete survey might have given more detail but these broad conclusions have been borne out by subsequent events. 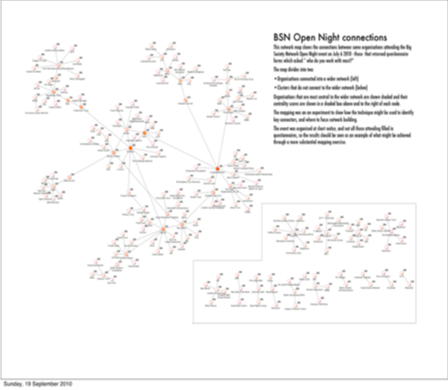 The network map below was derived from the Third Sector Research Centre's “Beyond the Radar” conference in London in 2011. In response to the question “who do you work with most ?”, respondents listed organisations and gave their estimate of the skills and resources held by these bodies. From this we constructed the network map below. 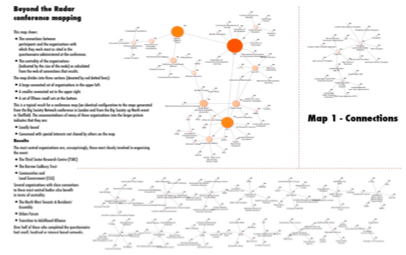 The map below shows the clusters of organisations that work together. 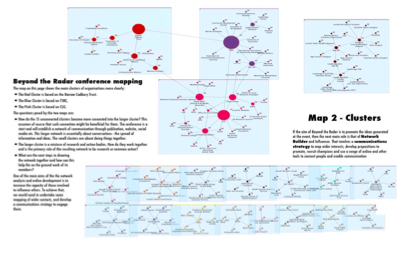 6 The Children's EcoCity in Dunfermline

This project is the latest in line of EcoCities stretching back 15 years. An EcoCity is an extended design exercise conducted with 40 primary school children aged around 11 in which they create a large model of their ideal ecologically friendly city. In Dunfermline, six schools participated and the EcoCity was part of a wider consultation on the future of the town. The pictures in the PDF below show the model. 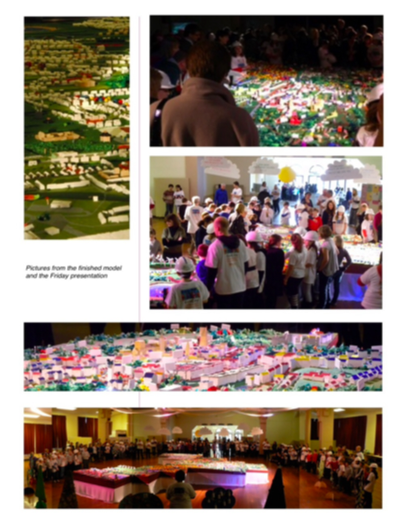 Following the building of the model, a workshop was held with a broad range of stakeholders in the town - retailers, tourist operators, local community groups, local officials etc. We asked each attendee to list the organisations and groups they worked most with and used the result to generate the map below. This is now being used to lobby the most influential nodes to take forward the ideas from the EcoCity and from other engagement exercises. 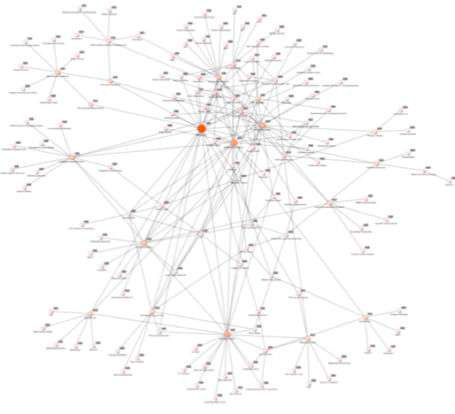 The network map shown below is derived taken from a blog piece by David Wilcox. This was the culmination of an exercise in crowd sourcing ideas, voting on the most popular and then creating a network of connections.

We developed a graphical display of how the ideas can be clustered (slightly arbitrary, because we drew the lines connecting the ideas, and the software followed through). In the map, a cluster analysis shows 4 clear sets of ideas, each with a strong central node.

The clusters and most central nodes do not reflect the votes cast - but that's another issue. 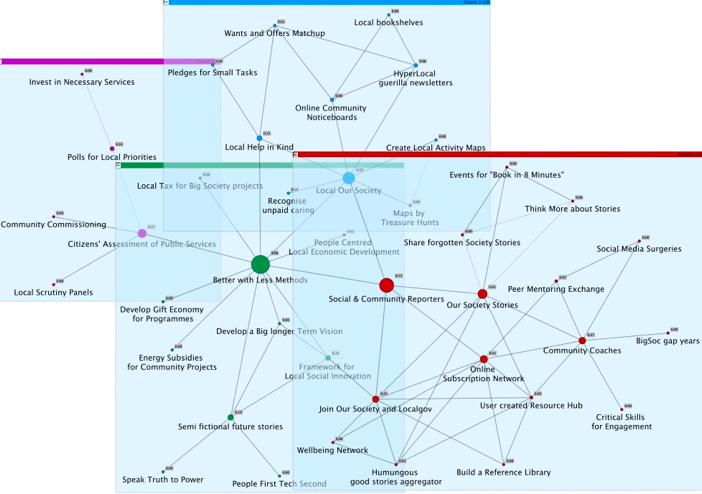 Media4Me is a six nation EU project exploring how both online and offline media can benefit communities. The UK location for this is Fishermead in Milton Keynes and the project is managed by the National Association for Neighbourhood Management. We have been using a specially tailored version of our social media game to facilitate local workshops attended by community groups and agencies. The game results in a series of stories about how local individuals might benefit from particular social media strategies.

As part of this work, we used a number of community events to create a map of the community and agency networks in the area. In an open, day-long event, residents and agency representatives were asked to draw their network connections in response to the question: “ who do you connect with most”. As the results came in, the map was expanded in real time on a large screen so that participants could see it develop. Although such maps can look complex to outsiders, they are generally readily understood by the people that drew them. 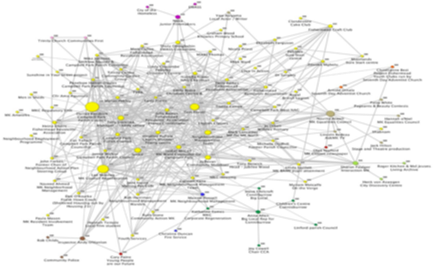 Following this we associated useful information (contact details, websites, blogs etc) with the nodes on the network. This allowed the map to be used as a source of community information while keeping the network patterns up front.

Local community groups are now able to consider using this map and learning how to continuously update it as a guide to how local agencies work, how community groups relate to each other and who the key players are.

“Drew's mapping of social connections in Fishermead added a great deal of value, principally by revealing, graphically, to the most civically active members of the community, the extent of social capital which already exists, but which too often was under-estimated. This in turn changed attitudes, and created new energy.“

The maps here show a first attempt to apply Social Network Analysis to physical urban networks. They show the street network of central Edinburgh. The idea was to see if the most central nodes also had urban design significance. As a resident of the city, I believe that it does. The most central nodes in terms of network analysis are also places of urban design importance - places which have their own name (The Bottom of the Mound, Top o' the Walk, Frasers Corner etc.) 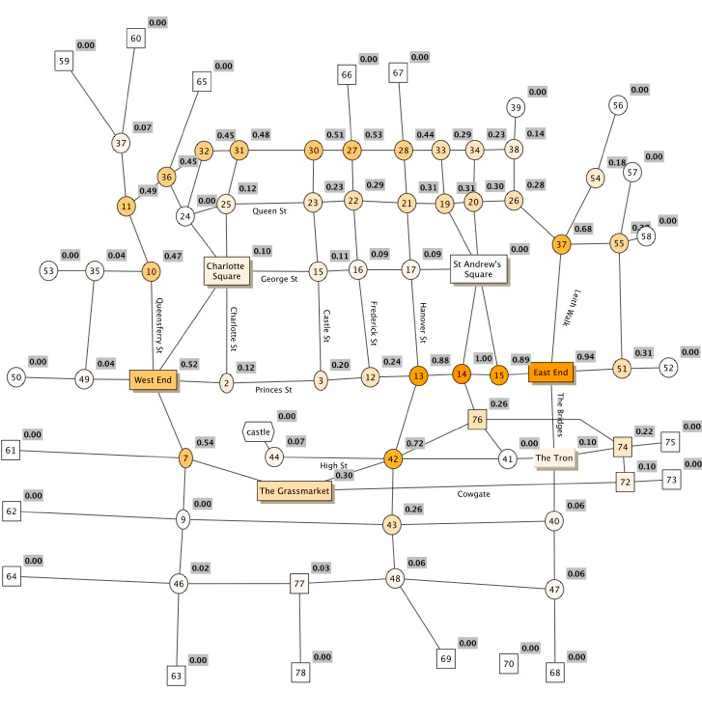 The map below uses the “natural clusters ” setting on YeD to group nodes. Again the clusters reflect recognisable areas of the city. 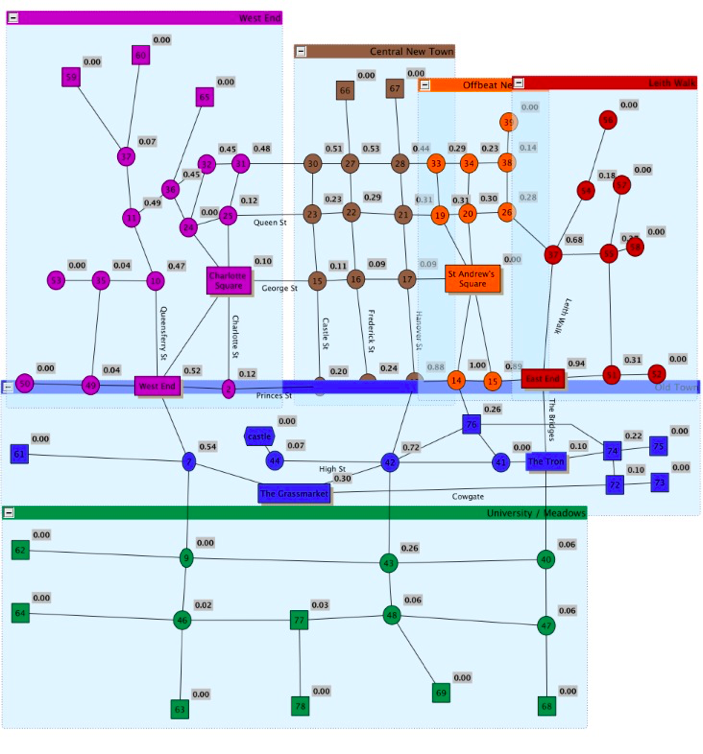 The map below was prepared to examine the centrality of road connections (nodes) on both sides of the Scots/English border. No survey work required here - just translated the road map into a YeD network.

The results showed that: 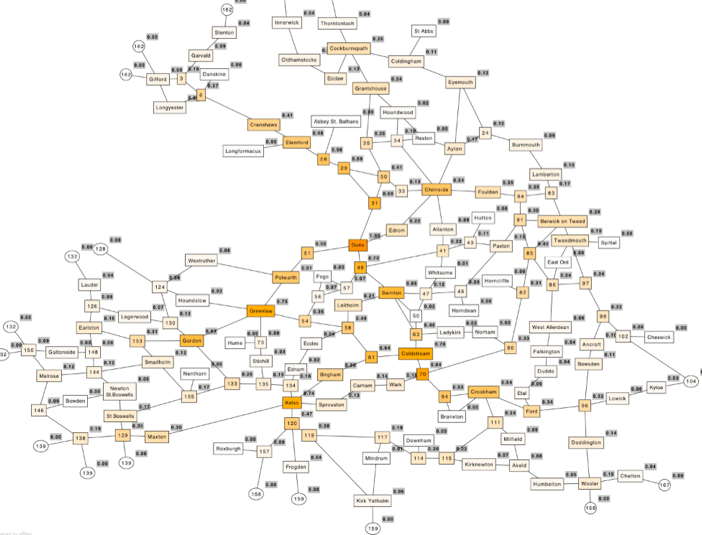 This is a map showing the network of streets in Stranraer. It was prepared as part of a study of the regeneration of the waterfront area in the wake of the move of the Stena SeaLink Northern Ireland Ferry to a new site further up the coast. The map was prepared to show the key junctions in the movement system and to compare these with significant townscape elements. The maps were drawn with network software which also analysed the centrality of nodes. 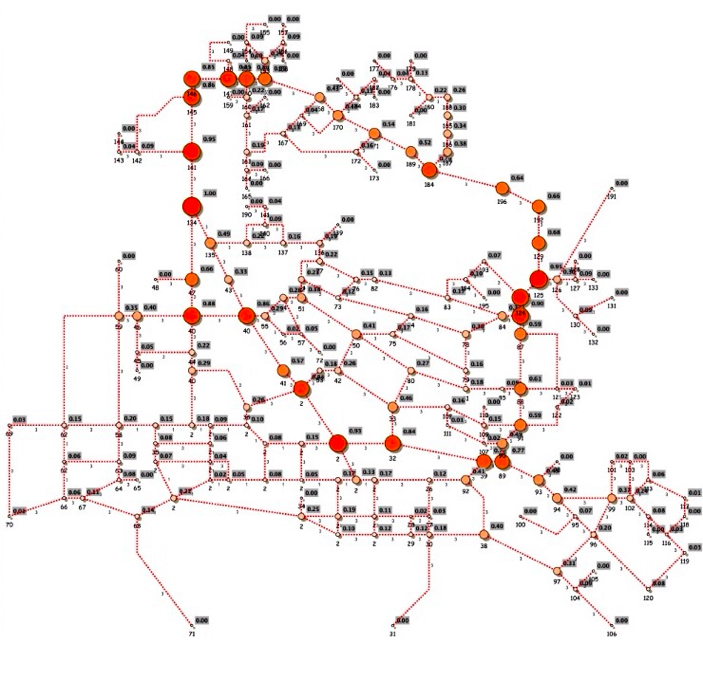 A  version of the Stranraer network map showing the “natural clusters” defined by the software is shown below. This was compared to a townscape analysis. The correlation with character areas was strong. 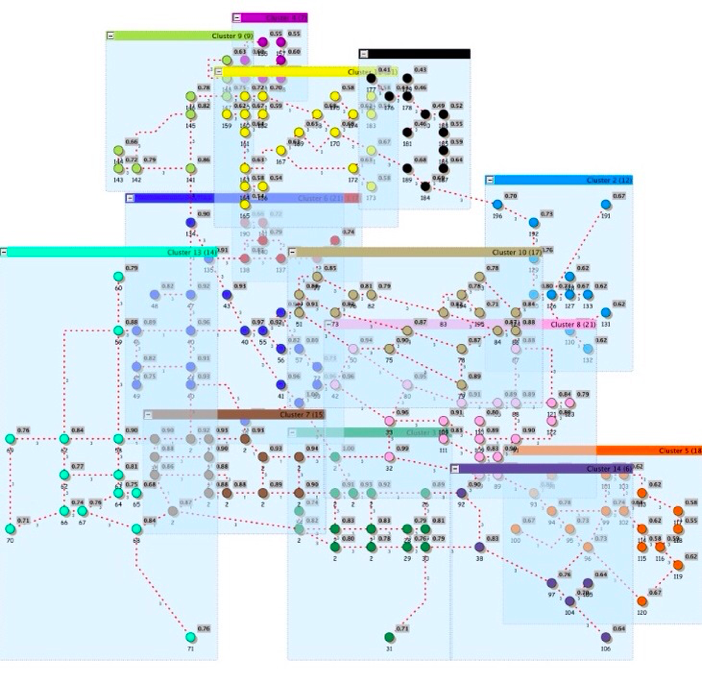 The assessment below was produced as part of the consultations associated with the Masterplanning of Stranraer Waterfront in 2009. At a Stakeholders Workshop, participants were asked to complete a short questionnaire indicating:

The first question allows us to draw a “map” of the relevant organisations. This is shown below. The nodes represent organisations and the links represent the working relationships specified in the questionnaire. The map shows the potential centrality of various departments and groups to the network of organisations.

Why does this matter? The position of an organisation within the network will help to determine the degree of influence that it has and how well it is placed to distribute information to the other organisations. This property (known as “centrality”) can be measured. In the map below, those organisations with the greatest centrality are shown in a darker colour. Thus “D&G Council” is the highest scorer not just because it has many links, but because of its position. 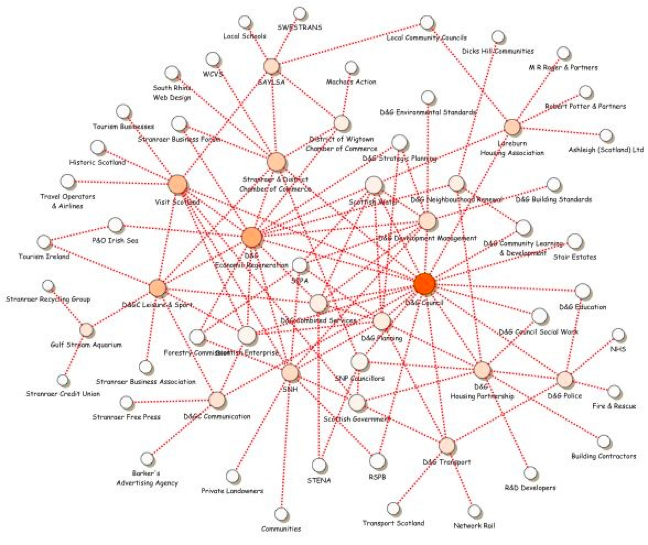 This project was commissioned by the Crafts Council of Ireland together with the 5 LEADER partnerships for Ballyhoura, Kilkenny, South Tipperary, West Cork and Wexford. We were asked to identify the crafts culture of these areas through:

Through an online questionnaire and a series of workshops held in the study areas, we identified the working links between the various participants in answer to the question: “who do you work most with?” This resulted in a network of 250 nodes and around 800 connections. The basic network is shown in Figure 1 below. 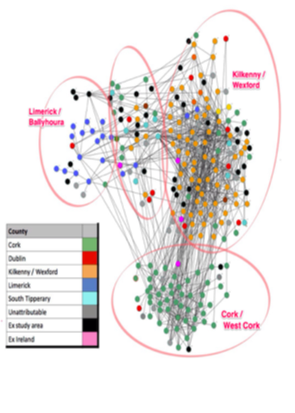 While the clustering of nodes is determined entirely by the network of connections, the node colour indicates the geographic location of an enterprise or organisation. There is a striking degree of correlation between the network clusters and geographic location. The cluster at the bottom of the diagram, for instance, is composed almost entirely of craft enterprises, suppliers, retailers and agencies located in Cork City and West Cork. This need not have been the case. The working clusters could have gathered around craft specialisms - ceramics, jewellery, woodworking etc. The network diagram shows that craftspeople tend to work with other craftspeople in their immediate geographic area.

The cluster immediately above that and to the right is composed mainly of nodes located in Kilkenny and Wexford and one of the main findings of the study was that these two areas cannot really be differentiated in network terms.

The cluster on the far left is composed of nodes in Limerick and Ballyhoura, while the cluster in the top middle has a mixture of nodes from different locations.

We also mapped the main road connections in the study area as shown in Figure 2. Nodes are a mixture of settlements and rural road junctions. Note that: 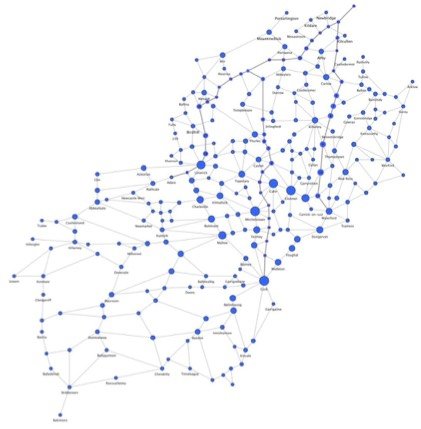 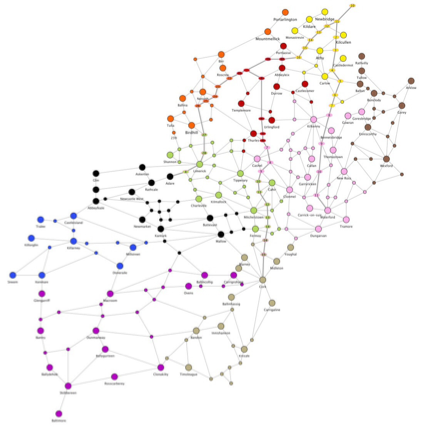 clusters of settlements / junctions in the road network

Figure 3 shows the results of a cluster analysis of the road network. Nodes are coloured according to which cluster they belong to, showing:

These comments echo much of the organisational analysis and show links between geographic distribution and operational and transport networks.

Although this work is experimental, it brings together a body of previous work that examines either organisational or geographic structures. The degree of congruence that we are finding is very encouraging for future comparisons.

In work for Croydon Voluntary Action (CVA), we have mapped the organisations and key individuals involved in Asset Based Community Development (ABCD) pilots in New Addington and Thornton Heath. This has involved:

The network map has been developed in Kumu. This online software allows us to progressively hand over the map to CVA and to monitor its use remotely as staff we have trained become more familiar with it and start to expand it.below shows the network of connections between key individuals and organisations involved in two pilot ABCD programmes in Croydon (New Addington and Thornton Heath).

The software allows us to attach information directly to nodes in a a sidebar and to carry out complex searches on various attributes assigned to nodes and connections.

The intention is that this should become an everyday method of recording the progress of the project. The metrics that SNA produces will serve as evaluators of: